A few weeks ago, on the 7th of November my parents, my little sister and i celebrated my 34th birthday.  They decided to take me out of the house for a drive.  I have been ill for the last few months now. I had become depressed and withdrawn and was not in the mood for any extroverted activity.  But with persuasion i relented.  We had a picnic at the midmar dam for breakfast and we then drove through to the Nelson Mandela capture site just outside of howick falls.  This place was the highlight of my birthday.


I remember the anticipation on our faces as we drove up that dusty path from the R103 in the Natal Midlands.  Something somber overtook us as a family when we got off my dads car and approached the newly erected memorial site.  As we walked into the building, heard the stories, studied the pictures, read the quotes, watched and recalled some of the events of our history as a nation, i became increasingly aware of the reason for us as a family to get into that car and drive for 3 hours to this place.


As we walked to the 50 steel column structure, i was thankful that together as a family we were here to reflect, to remember the sacrifice, share in our collective history and to be grateful that we are now standing humbly on the shoulders of great men.  On that day we joined in the common narrative of all South Africans.....that we are a fortunate people, blessed with unmerited favour and compassion. Because of the sacrifice of others and their belief in our good, we have a huge debt to pay back to our society.


Today when i woke up at 5:00am, I noticed a text message on my phone sent by my sister during the late hours of last night.  She said: "Madiba passed away. :( :("  I was sad and a bit heavy.  And the heaviness continued to grow throughout the day as i turned on the television, read the news, spoke and prayed with some of my friends.  It has now come to the point where i feel indebted and at the same time grateful.  I don't have the right words today.  And to be honest i feel like a swabbing clothe full of emotions.  I have not posted here in a long time, and i don't really know what i want to say but just that i need to express something deep inside.


I remember the segregation as a child.  I remember the wooden signs that separated the people.  As a family we grew up in Durban which is a coastal city, but our visits to the beloved ocean was limited to a spot on the beach reserved only for indian people. We made the most of our times there although it was also a spot where the waste waters of the city, and the canals would flow freely into the ocean.  I remember how happy my father used to be when his boss would comment on the tasty "indian food" my mum used to make.  Some of the comments were not so welcomed though.....like the "drie-hook-coolie-koek" an Indian samoosa that used to take up most of my grandmothers past time in the making. She used to make these and sell them in order to keep her house afloat in financially trying times.


My dad used to go door to door selling these on her behalf during his schooling years.  I remember him telling me the stories of his over used school uniform and how he used to cover up the holes in his pants with his handkerchief.  I remember being called a coolie(derogatory word used for indians by white people) and was accustomed to the word kafer (derogatory word used for black people by white, indian and colored people) Please do not mistake my candidness as me being trivial.  These were serious matters, but the greater injustice than name callings was the system of inequality that served to benefit so few but harmed and refused so many people their basic human dignities.  Dignities like sanitation and proper education, a pittance as a less than minimum wage for hard labour, no land to build a decent home in and insufficient recognition as a fellow human being.

Amidst the turmoil there was a lot of good times in my side of the race spectrum:  I remember how happy we used to be when my father would bring us home "rounders" from KFC at the end of each month, which we would share as a family.  Restaurants were never an option for us growing up as "indian" children of apartheid.  And we were never properly exposed to the white or black communities.  I grew up in Merebank, a communal mishap, a health hazard which was a result of the land areas act.  I say it was a health hazard because they put us in the middle of a factory zone, shared between three giants: Engen, Sapref and Mondi.  Factory fumes would be our common problem. I ended up with a chronic respiratory disease as a child.  The sad news was that i shared the same condition as most of my class mates.  The factory's gas emissions were too high then and were not properly controlled, governed and regulated.  But the industrial mishaps almost always affected the social underclasses.  My mothers father was very hard working and was orphaned as a little boy.  He never completed his matric but grew up to be a successful entrepreneur and purchased many lands throughout Natal, including the Pavillion land that the famous Durban shopping mall is now built upon.  His investments were taken away from him when the land areas act was enforced and this left my mother and her siblings without inheritance when he died.

I never considered my family as being poor when i was a child, but children never look at money and possessions the same way that adults do.  Although my parents never received University education, they worked hard for their small earnings, and, because i was in a communal family with grandparents, aunts and uncles, i was always provided for with everything as a child growing up.  When i compare my life to the life of other South Africans who lived in such abject poverty (and who still do to this day), i feel guilty for the circumstances that have attributed to my gains and their losses.  As a child, my only encounters with black people would be when the maid would come looking for a job or the gardener would come to assist in our planting of crop in our backyard.

I grew up in a society that was inculcated with a fear of cross cultural interaction and this was passed on to me so i helplessly watched how separate eating and drinking utensils were kept aside for the black workers and couldn't help but think in my little brain that this was not the best way of service to them.  In spite of my best efforts as a child, in my early schooling years, this built a passive indifference in me towards South Africans of other race. This indifference was further enforced by the community i grew up in at large and by the regulations and governing laws that kept us divided.  I have been unlearning and realizing how costly this indifference was.  I have been learning how this was a fear-based concept used to further estrange the ignorant in an already unjust society.  We feared what we did not know.  We feared and hated the black man because we did not know him. We did not know his plight.  We did not care to fully understand the abject poverty enforced upon him by governing laws that served to undermine him and limit his every way forward.  We envied and despised the white man because we were not allowed to know him.  We feared the coloured man because we did not know him.  Better than us were those outstanding few: white, black, colored and indian freedom fighters, who saw through these divides and perceived a united South Africa at a time of intense social conditioning, when all we could see was the color of our skins

.
I am 34 years now and although many things may have changed inside me, i am still learning.  There is a lot more to be learned.  There is still a gap that needs to be bridged.  There is still injustice that needs to be met with love, compassion and understanding.  I wonder if we are a rainbow nation yet?  Unless we can reach across any divide and feel the other person as our very own, we are not a rainbow nation.  I hope we will not meet each other on fear based pretense.  If you come to my home to visit me, wherever you may come from, let me share it with you, let me receive you with humility and gratitude.  Let me show you my home, my art.  Let me share with you my music and the things that make me laugh and smile. Let me make you my own, a very part of me, essential to my existence.  Let us, together, honour the great man who brought us to this table.  To this meeting place of hearts. To this common narrative.  Let us share in his humanity, let us take comfort and hope in his flaws and mistakes and let us aspire to his greatness.  Madiba, you were not just "one of" the great South Africans.  You were the greatest of us all. 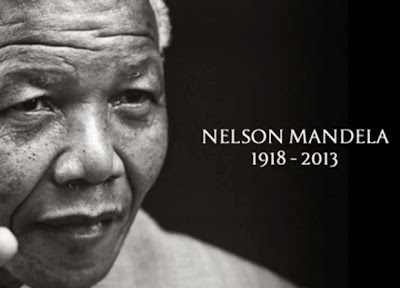