It turns out that Sunil and I really enjoyed each others company. He asked me to come and stay with him and his father in Gangotri. (His mom had passed away) I was happy at his invitation. Gangotri is a very beautiful place. It has a walkway that leads all the way to the main temple. Along the walkway are villagers selling all sorts of amenities. To the far right will be the Ganges flowing fast and loud. On the other side of her banks are many Ashrams where pilgrims take rest. In the old days, many pilgrims would make the journey to Gangotri via foot. Many of them from all over India, including the Southern most part. This would mean years on the road for some. This gives one an idea of how special this place is. It is believed to be charged with the energy of many an aspirant, many a seeker, many a holy man throughout the ages. 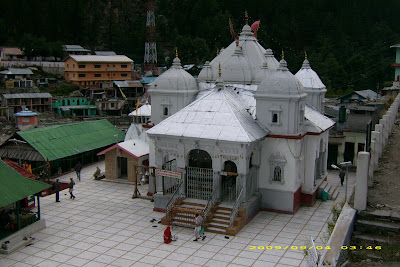 
If this is true, i can certainly understand why everything here feels so ethereal to me. I walked with Sunil and he took me straight to the temple where he did his prostrations. The temple is an amazing white stone structure said to be over 300 years old. I bent down to kneel outside the temple gate and i could feel my body shaking. It caught me off guard and i did not know why. I was also a little light headed and Sunil could see the look of bewilderment on my face. He smiled at me and said, come on lets go. It was an encounter for me. I had never had this reaction in any of the other places i had been so far. For Sunil, it was another day of coming home to Mother to say hello and then off to play.

We then walked to his house, a simple two-roomed building on a hill to the left of the Ganges if you stood on her banks and were facing the source. From his house you could see everything, all the other village houses, the main temple, the Ganges and the other Ashrams. If one veered off into the distance, one could see what looked like cave dwellings of holy men in the distance. Yes!!!! In fact there were Caves that were clearly visible in the mountains; and yes some of them looked like they were being inhabited. Excitement began to rise within me. My oh my what a day for an adventure.
Posted by VishalAyurveda at 4:22 PM Links:
Post views:

I left the ashram with renewed strength that morning. A feeling of elation came over me as i walked downriver trying to find my way to the nearest ghat into town.

As i walked i saw a young man dipping his urn into the Ganges. He looked up at me and smiled. I smiled back and greeted him with Namaskar. I asked him where he was going in English and he seemed embarrassed to reply. He spoke in Hindi and from what i gathered he was going to the temple to do his morning oblation. I said "Me tumhare sat chalta hun." meaning I am coming with you. He nodded and we walked together. Something interested me about this particular individual and i wanted to find out why. 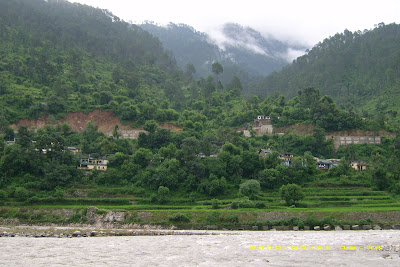 Dreaming i could hear the conch. Waking i could see a figure of a man before me, facing the river, deep in prayer. Chandini lay above me accompanied by her entourage of stars. It still seemed night to me, although the familiar sounds around me and the feeling in the air told me that nature was in her early stages, preparing to meet the dawn. I was not sure about the figure before me. My eyes were still blurry and i could not make him out clearly. I looked at my time and it was 3:30am. I blinked my eyes a bit to see more clearly. The man before me wore saffron robes, had a beard and from the little i could make out in the light, looked elderly in composure. I knew that he was either a swami or a sadhu. He was about 6 meters away from me. I was sure he must have seen me.  What was he doing here?

02 September - My sleep by the Ganges

Walking down the alley way i saw children playing, cows scavenging for food, shopkeepers sitting patiently, waiting for the next customer to contribute to their livelihood. My companion had politely excused himself and i was once again alone. I could hear her getting louder 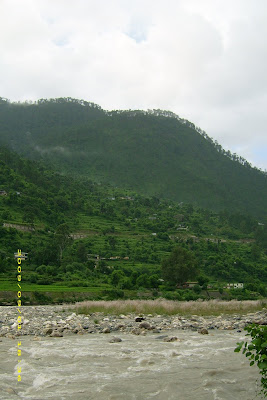 The smell of ginger Chai filled my nostrils as i jumped off the bus in Uttarkashi. The old man who i loved so dear had disappeared. I said my goodbyes to Uma and ventured off. I was now in a new town surrounded by traffic; motorbikes, jeeps, trucks, cows, bicycles and buses. This city, like every other city in India, has a rhythm of its own. The sound of a motorcycle horn quickly brought me back into the present moment as the biker had to maneuver around me. I was getting in the way again. :)

I got off the road and onto the pavement filled with different traders, food, fruit and vegetable vendors. It was six in the afternoon and the city was very much alive. A cool breeze blew past me in the middle of the heat and i knew where it came from. She was calling me. Asking me to come and be silent for a while. At that moment, a teenage boy came running up to me repeating the words: "Sir, room?" "Nahi," i replied, "Which is the way to the Ganga?" He pointed towards an alley with a strong look of curiosity all over his face. I walked in the direction of the alley and he followed me, smiling gently and gazing at me from time to time. I entertained his curiosity and started talking with him, we exchanged some hindi and english between the two of us, swopping and dancing around with it as we walked together. It was a pleasant exercise but i was determined to see the Ganges again and be alone with her for a while.