My first Shivaratri with Swami Purnachaitanya 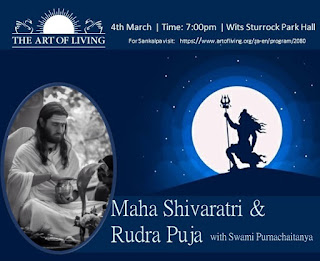 Last nights event was really special.  When Swamiji addressed the crowd after the Rudra Abhishekam he was talking to us about Guru and how fortunate we are all to have Guru in our lives.  Someone to watch, draw near to and learn from.  He repeats Guruji's words and says: "God, Guru and Self are one." 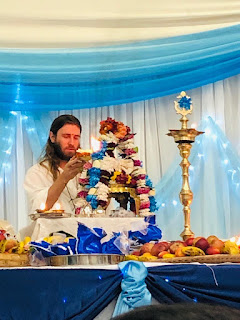 Then he spoke about all the people in the world and he said that some people are truly and honestly seeking and are giving their 100% in search for a Guru.....they will try all things to find this. They don't know what they are looking for.......but they are searching so desperately.....and then tears welled up in his eyes and he had to pause for some time because of the intensity of the moment.......and then i could feel tears welling up in my own eyes because i could identify with that searching and that feeling of being so lost before meeting my Master.  And then he says that we don't even realise how fortunate we are that we have Guru in our lives.  And while we are here we should take every opportunity to make 100% use of him......chase after him, rather than all these other things that appeal to the senses. 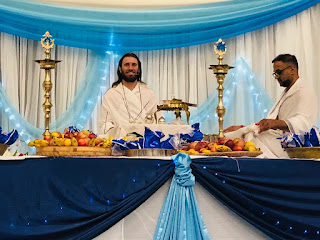 Then i heard that he was going to be in Midrand temple, afterwards, to do midnight Abhishekam with the Punditji there.  So i left the hall at about 10.30pm and reached Midrand at about 11pm and Swamiji came just in time at 5 to 12 to do the Abhishekam with the Punditji.  Punditji had a soft spot for Swamiji, you could see, and gave him a lot of licence in the temple.  Swamiji chanted the relevant mantras to each of the devatas/murtis in the temple in sync with the pundit.  Punditji was very happy......it was nice to see an old man smile like that.  He was so happy he made Swamiji sing a few bhajans and share knowledge with us after.  That's what the below picture is about.  There were only about 5 people from art of living there, the other 80 or so were from the local community.   The air was electric after Swamiji sang.  The whole atmosphere livened up.  He talked about the meaning of Shivratri......how Shiva is not a person sitting on a mountain with a six pack......and the real significance of the marriage of Shiva and Parvati (which is what this day was all about) 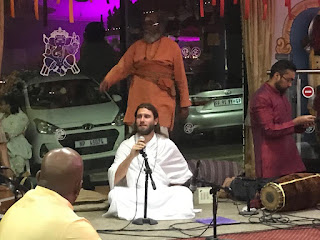 He gave everyone personal blessings in Wits hall......i never got to take blessings from him or say hi to him at all because i had a Seva to do......but in the Midrand temple at about 01.00 am I remember closing my eyes and meditation just happened............it seemed like seconds....but after a long time when I opened my eyes I, I realized my body was shaking..........i saw Swamiji looking at me and smiling......then he smiled a more light-hearted smile and did a "Hows it" gesture with his head, winked at me and we shared a moment of spontaneous laughter together. Priceless. It was really a blessed experience. I never got to say hi or talk with him....but in moments like these, when the eyes are closed, the love feels deeper.........and the feeling of belonginess with people and closeness with the divine feels too big for human emotions......you cant exchange these priceless moments of connection.....these are really precious times.


I ended up leaving the temple at about 02.00am.  I was the last Aol person to leave.  But Swamiji stayed on with the Midrand Sanga until much later and stayed over at one of the temple devotees houses.

As an aside:  This is what i learned about the Marriage of Shiva and Parvati:

Shiva is the untouched, the formless, the nameless, the substratum of all existence, the cause of existence but not contained within it.  This is known also as the Purusha, the non-dual reality, the Great Love or the potential energy of all of creation.  This is Shiva Tatva (essence)

Then there is the play, the dance, the manifest existence, the duality, the creation itself.  Filled with the love of Shiva, she plays and wherever she moves she creates.  This is shakti.  In its purest form its the manifest expression of Shiva.  The tatva(essence) that is now manifest in form is known as the Prakriti (nature/matter) or Parvati.

In this world the Purusha, non-dual reality, or subtle energy is said to be about 10 inches above the manifest or gross reality(Prakriti).  Shivratri happens almost every month on the new moon....where the two realities come close enough just to touch.  but on this particular month of MAHA shivratri, because of planetary positions and alignment of moon and earth......the two realities dont simply touch but converge and intermingle.  This means that Shiva (supreme consciousness) and Parvati (matter) mix and collide.  This is the marriage of Shiva and Parvati.....this is Shivaratri. 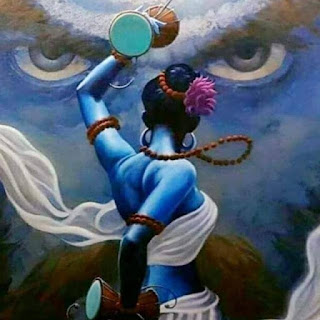 So what does this mean for us?  It means that when we meditate on this night.....we return to the source (Shiv Tatva) we can realise that this reality or experience is just a play.....a dance and that our true identity is Shiva.......and that Shiva wants to dance..................and so we are dancing......every dance has dips and pirouettes but we are not confined by these.......we are Shiva.  So Shivratri is a night where we all have a chance to sit with eyes closed and return to the source and then have great peace about this play we may find ourselves in thereafter.

A Video by Swamiji on Shiva

Really a blessed Shivratri....my first of its kind.
Posted by VishalAyurveda at 3:23 PM
Post views: